As a paediatric infectious, tropical disease and global health specialist, Dr. Anna Banerji (MD’89) has been guided by this philosophy throughout her 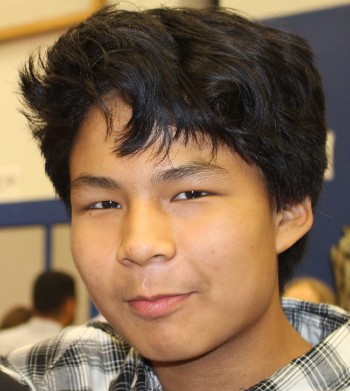 The Late Nathan Banerji-Kearney entire career caring for, researching and advocating on behalf of the world’s most vulnerable children. And, now, two years after the sudden death of her adopted 14-year old Inuk son, Nathan, it’s also something in which she’s found great comfort and healing.

Banerji’s first journey to the Arctic in 1995 changed her career and life trajectory. Since then she has been to the Arctic about 50 times. On one particular trip, an Elder mentioned to Banerji that the community was experiencing a shortage of foster and adoptive families. She replied by sharing her long-standing interest in adopting a child someday.

That someday came nine years later. At the time, Banerji had already been leading research in the Arctic for nearly a decade and had grown especially close to the Inuit communities in Nunavut.

The Indian Ocean earthquake and tsunami had just struck and Banerji was preparing to join a Red Cross relief mission to the hardest hit areas. Her phone rang. It was a resident Banerji was supervising who was doing a stint in Iqaluit. In discussion with the Elder, Banerji’s name came up. There was a baby born that morning who needed a home. The Elder told the resident “Dr. Anna always said that she would adopt an Inuk baby.” Was she still interested in adopting?

Banerji meant what she had said nine years earlier and, in fact, had already completed all the requirements for an adoption. When she was called, she instantly agreed to adopt, although she didn’t even know if the baby was a boy or girl or its age.

Banerji saw Nathan for the first time when she was arrived to pick him up from the Arctic. He was four  months old. Her almost four-year old daughter was very confused when Banerji showed at the airport up with a baby — telling her friends that her mother bought the child at the airport!

Banerji was overjoyed. But she was also deeply aware of the trust the community was demonstrating in her by placing the infant in her care. While Nathan grew up in Toronto, Banerji worked closely with her peers in the Arcticto help nurture and maintain the boy’s ties to his birth community and family, as well as to his Inuit heritage. She watched him grow up into an exceptionally caring young man, who always placed the needs of others before his own.

“Nathan loved the Arctic,” Banerji says. “We returned often, and he was always welcomed home like a celebrity by his birth family and the wider community. But, as he matured, Nathan started to see the many challenges the community faced. Many Inuit residents, including those to whom he had become close, lived in extreme poverty. He also became aware of the prevalence of substance abuse and youth suicides. It began to weigh on him.”

“Nathan began to deteriorate quickly as he approached his own 14th birthday,” says Banerji. “He shared that he was feeling overwhelming anxiety and depression. We tried to get him help, but kept running into brick walls. The mental health system failed to recognize the inter-generational trauma he was experiencing — trauma that we believe was uniquely informed by his Inuit heritage."

Twelve days after his own 14th birthday, Nathan also died by suicide.

Now, two years after this tragic loss, Banerji is joining several close friends and colleagues in leading two new initiatives that seek to both honour Nathan’s life and contribute to positive change for Indigenous students in the Faculty of Medicine.

The Nathan Banerji-Kearney Award for Indigenous Students is a new needs-based bursary in the MD program. It was established by Banerji’s classmate, to help reduce financial barriers for medical students, and encourage more Indigenous young people to consider medical careers.

To complement this bursary, Banerji and Diana Alli (retired Senior Officer, Service Learning, Community Partnerships, Student Life in the Faculty of Medicine) have also established The Nathan Banerji-Kearney Memorial Award for Indigenous Students. This award will recognize a fourth-year, graduating Indigenous student in the MD program who demonstrates excellence in working with Indigenous communities.

“I believe Nathan’s story is just an example of the much-larger challenges Indigenous peoples have faced and continue to face in Canada,” says Banerji. “By providing these opportunities to Indigenous medical students, we’re taking a small step forward. We need to do better. We can do better and these two awards will help.”