Faces of U of T Medicine: Kirill Zaslavsky 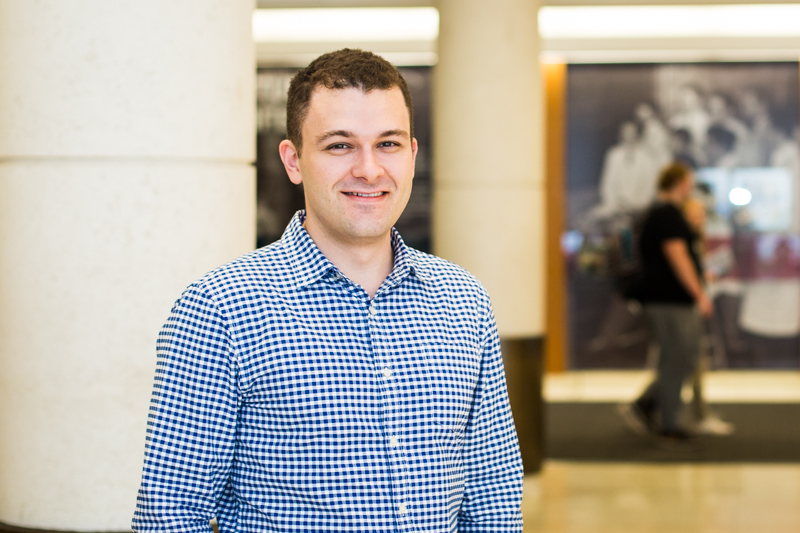 Kirill Zaslavsky As an MD/PhD student, Kirill Zaslavsky’s educational experiences have ranged from applying CRISPR to human stem cells to study neuropsychiatric disease to clerkship. Earlier this year, Zaslavsky completed his PhD, which focused on the molecular and neurophysiological causes of autism spectrum disorder (ASD). He’s now in the third year of MD studies. Zaslavsky has also become a voice for others working to become ‘double doctors’ in his role as President of the Clinician Investigator Trainee Association of Canada (CITAC,). Zaslavsky spoke with writer Erin Howe about his research and the importance of being an advocate for basic science.

Congratulations on completing your PhD earlier this year! Tell me about your research.

I studied ASD in the Ellis Lab at the Hospital for Sick Children (SickKids). ASD is a neurodevelopmental condition that affects more than one per cent of children, predominantly boys. It affects the way a person communicates with others and how they relate to the world around them.

Recent advances in genetics have revealed a complex picture, with associated mutations in over 100 different genes. Roughly half of those genes govern the function of synapses — the chemical connections necessary for communication between neurons. While this suggests ASD is a disorder of brain wiring, understanding the functional consequences of these mutations is a challenge because there’s a lack of available neuronal tissue from living individuals with ASD.

To address this knowledge gap, the Ellis Lab generates induced pluripotent stem cells (IPSCs) from people with ASD and converts them into live neurons. This recently-developed approach allows generation of an inexhaustible supply of neurons for functional and mechanistic studies. Using CRIPSR-Cas9 genome engineering, I showed that neurons with mutations in a particular ASD-associated gene become larger, develop more complex morphology and make more synapses. Together with our collaborators in the Salter lab, we then showed these changes are associated with a several-fold increase in the activity of excitatory synapses, which increases the likelihood of neuronal activation. These results are consistent with the little we know from post-mortem studies of brains from people with ASD, which generally show an increase in synapse density.

My hope is that as more ASD genes are explored in this way, we will approach a molecular understanding of ASD that will help inform development of therapy.

What appealed to you about the MD/PhD program?

Early influences and mentors played a significant role in my decision to pursue both degrees.

When I was an undergraduate student in neuroscience, Professor Andrew Baines, himself a former clinician-scientist, was highly supportive of a career in both medicine and science. Through one of the assignments in his course, I connected with Paul Frankland, an associate professor in the Department of Physiology studying the organization of memory and hippocampal neurogenesis at SickKids. When I was a member of the Frankland lab, I worked with Scellig Stone, a neurosurgery resident completing his PhD.  Stone — who is now a professor at Harvard Medical School and Director of the Movement Disorders and Deep Brain Stimulation Program at Boston Children’s Hospital — showed me how clinical practice and research are linked.

After these experiences, the MD/PhD program at U of T was a logical choice after this. The scientific community at the university is vibrant and collaborative. The ability to do my PhD early on in my training gave me the opportunity to do fundamental research with people who are leaders in their respective fields.

As a student who has just returned to MD studies, how would you describe the ways how your studies and PhD studies complement one another?

While the PhD was a period of highly-focused, narrow study, my experience in the MD has so far been broad and all-encompassing. The PhD was much more about learning how to think critically, approach difficult problems with creative solutions and persevere in the face of difficulty. Going through the MD curriculum, I find myself more critical of the evidence on which medical knowledge is based. Doing my PhD as human genome sequencing became increasingly accessible and genome editing ceased to be science fiction changed how I view the future of medicine. There is a lot of exciting work to be done.

You’re also involved with CITAC. What kinds of things have you been working toward as the organization’s president?

The primary goal this year was to advocate for support for clinician-scientist training.

CIHR terminated MD/PhD program support in 2015 and since then, we’ve contributed to a body of work evaluating the performance of these programs in Canada. For example, a national survey of MD/PhD alumni conducted out of UBC showed these programs are successful in generating academic physicians and most graduates work as clinician-investigators. So, we find it perplexing that there’s no federal support for this training pathway.

We also found this issue is part of a broader, more pervasive theme in Canadian research. The Naylor Report, a review of Canada’s Fundamental Science Review published earlier this year, makes it clear our research ecosystem has become underfunded and disorganized. Canada is the only G7 country to decrease spending on research as a percentage of GDP in the last 15 years. We’re also spending a jaw-dropping 32% less than the OECD (Organisation for Economic Co-operation and Development) average.

As prospective clinician-scientists, our future is inextricably linked to the health and success of the broader research community and why we hope the recommendations in the Naylor Report are implemented in full.

What do you enjoy doing when in your spare time?

Catching up on sleep, spending time with those closest to me, and enjoying a good show (everyone needs to see Planet Earth II).